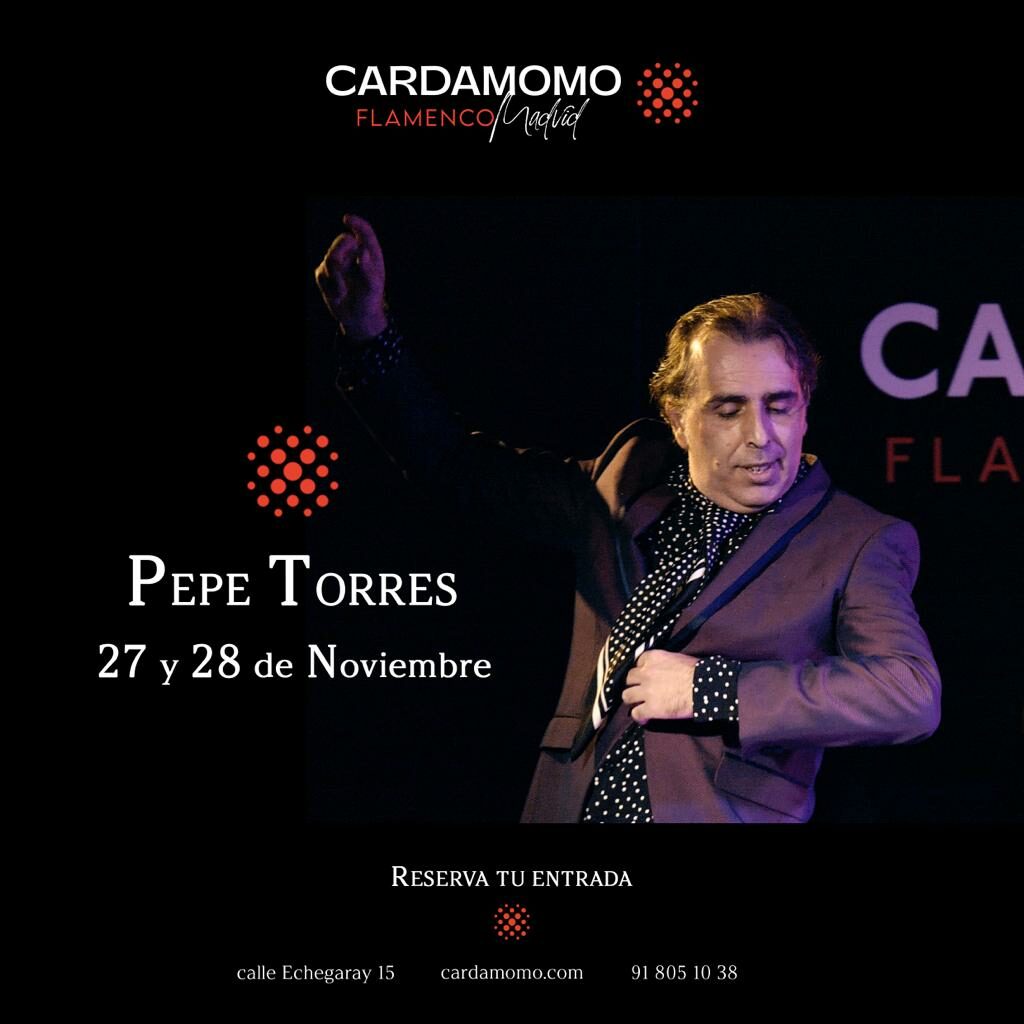 Born in Morón de la Frontera (Seville). He is from a family with a very significant flamenco roots in the history of Flamenco – “from caste comes to the greyhound” -, given that he is the grandson of the remembered cantaor “Joselero de Morón”, and the great nephew of the great Diego del Gastor.

We are facing one of the bailaores who reflects what we could call, the perfect pairing: tradition-evolution. He collects the legacy of his elders and adapts it to their ways of feeling and expressing, in such a unique way that it is a reference for how to transmit what is received enriched with his own personality.

The dance of Pepe Torres is the experiential dance of the neighborhood patio, polished, updated, and delivered on a platter. The art of natural elegance, with an approach in which strength is given by sensitivity and compass.

From the age of 15 he has worked in Peñas, Tablaos, Festivals and National and International Theaters. He has danced at the “Flamenco Festival U.S.A” touring the United States with Farruquito and Juana Amaya. In 2004 he traveled to Japan where he performed in the most important theaters in shows with Manuela Carrasco among others.

His career was consolidated when he formed his own company with which he presented his show “Así Baila Morón” that could be seen at the Seville Biennial as well as in the “Bienal Solidaria” cycle. In the years 2017 2018 and 2019 Pepe Torres performed important performances such as a tour of Spain with the great guitarist Tomatito creating the show “Jirones de Gitaneria” which premiered at the Albuquerque International Flamenco Festival in New Mexico. Pepe Torres combines his shows with being in the best tablaos in Spain.

It is a pleasure for Cardamomo to have you on our stage once again.

will be accompanied by two important dancers on the current flamenco scene: Nazaret Reyes and Paula Rodríguez (Premio Desplante Femenino 2021). In addition to the guitar of maestro David Jiménez, and Antonio Jimenez, the cante of Manuel Tañe and Jose del Calli; the percussion of Felipe Maya, and Laura Abadía as special cante.

You do not miss the hype. IN CARDAMOMO!