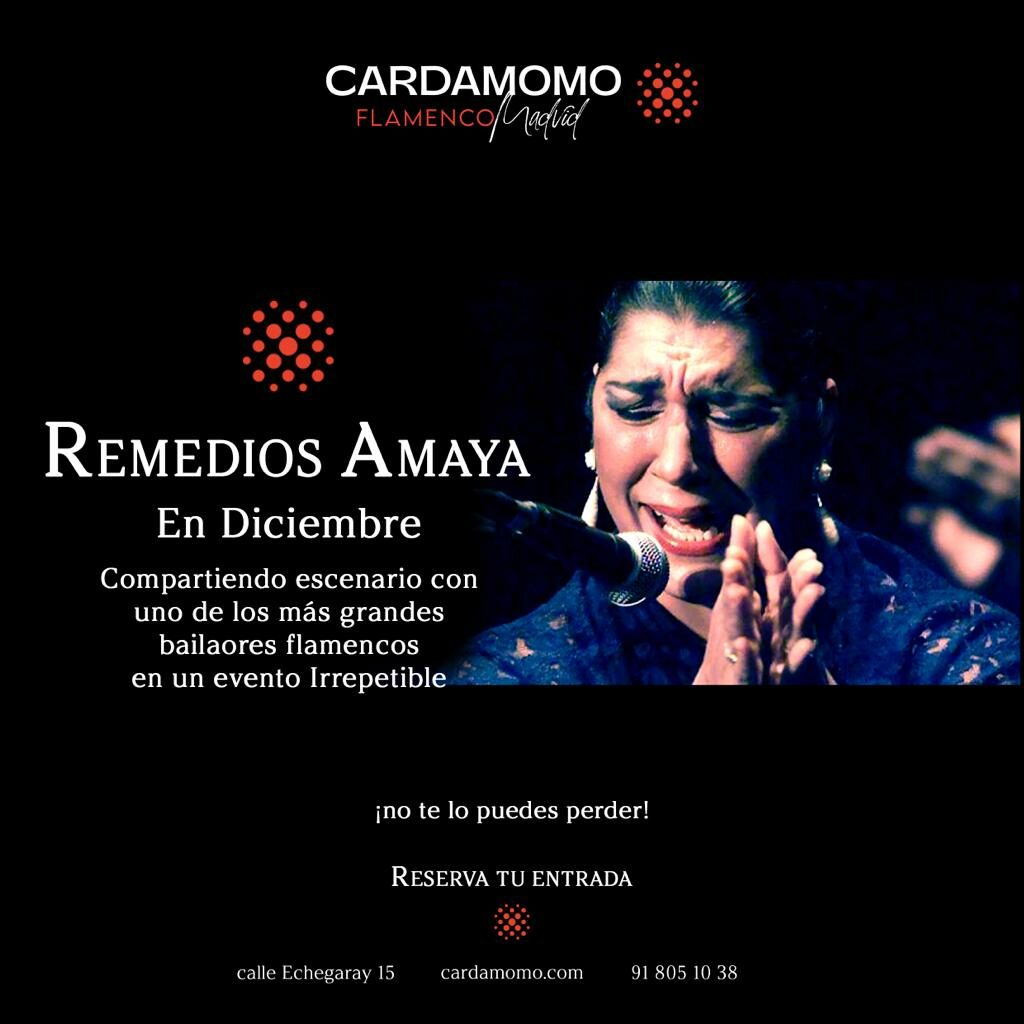 Remedios Amaya for the first time at CARDAMOMO.

CURRENTLY ONLY PHONE OR PHYSICAL SALE.

Outside the flamenco world, she is remembered by many for her performance in Eurovision, but not everyone knows that within the flamenco world Remedios Amaya is considered the best flamenco singer of all time. The personification of Camarón in woman.

This great artist will sing to one of the best international dancers of all time, who will not be revealed until 1 month before.

“I am an inspirational person, not a gridded one.”

María Dolores Amaya Vega, Remedios Amaya (Seville, 1962). Cantaora. From an Extremaduran family, he was born on May 1, 1962 in the Triana neighborhood of Seville. Remedios Amaya began singing as a child in the tablaos of Seville. The cantaora is known as La Camarona de Triana, as she was Camarón’s comadre and muse and, it is said, one of the artists who most inspired the maestro from La Isla. In 1978, she released her first album Remedios Amaya.

In 1983 she was chosen to represent Spain at the Eurovision Song Contest, held in Munich (Germany). She was the first gypsy woman to attend the festival.

She has several record albums with her such as New Moon, Seda mi piel, Turai Turai in 1997, with which she sold 150,000 copies, I’m going with you, Soy Gitana or Sonsonete in 2002. In 2004 she published the compilation Grandes Éxitos. In 2014 he published a new album produced by Alejandro Sanz. In 2018 he obtained the Radiolé Award from the PRISA Group station for his entire career.

The 2 nights will be, without a doubt, the flamenco event of the year.

The artistic painting, directed by Laura Abadía, from our house is made up of: Maestro David Jimenez and Yerai Cortés, on guitar; Jose del Calli, on cante; Paula Rodriguez (Premio Desplante Femenino 2021), at the dance. Felipe Maya, on percussion; Laura Abadía, with her special cante number.

This will be a unique occasion that may not be repeated in a space of just 90 people.