Born in Santander, she began her career at a very early age to become a young professional flamenco dancer. Paula captivates with her charm, strength and energy providing a great experience during the show. 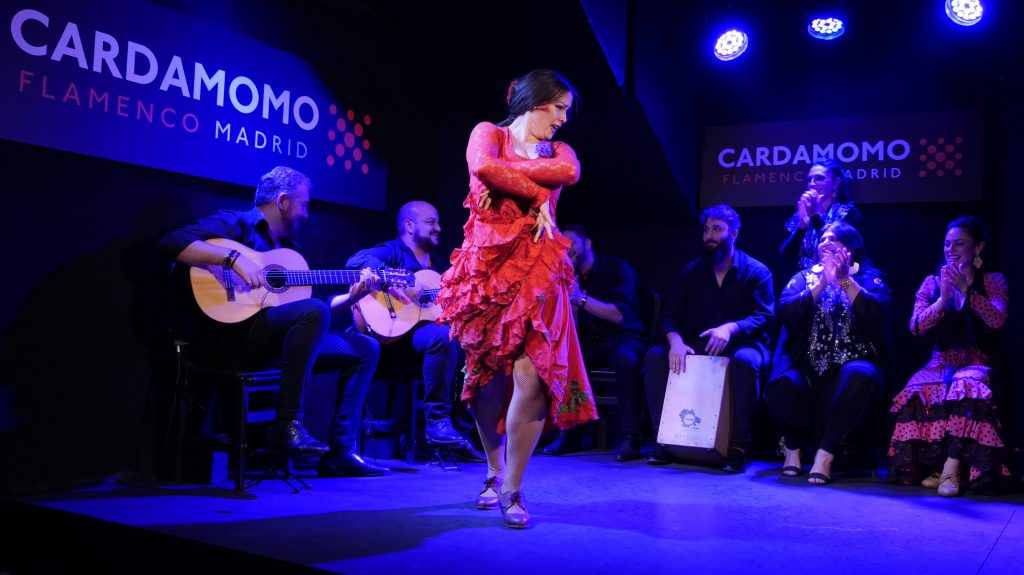 Born in Santander, she began dancing at the age of four at the Centro Autorizado de Danza Armengou and until she was seventeen she studied classical and contemporary dance with Gema de Beraza, Spanish dance with Carmen Armengou and flamenco with Paz Diaz.

In 2007 she moved to Madrid to complete her studies at the Centro de Danza Española y Flamenco Amor de Dios with teachers such as Truco, María Juncal, Alfonso Losa, Pepa Molina, and more exclusively with the teacher Merche Esmeralda.

In 2011 she continued her training in Seville taking classes with Juana Amaya, Andrés Peña and Ramón Martínez.

In 2008, First Prize with congratulations from the jury in the National Competition of Anaprode in the modality of flamenco, with the piece “Tiento a tres”.

First Prize with congratulations from the jury at the Anaprode National Competition in the contemporary modality, with the paso a dos “Necesito que me necesites” (I need you to need me).

In 2009 gold scholarship of the I Cycle of Complete Formation of Flamenco in Amor de Dios.

In June 2013 finalist in the II Flamenco Dance Contest of the Madrid tablao “Las Carboneras”.

In July 2014 finalist of the Spanish dance and flamenco choreography contest with the piece “Al placer de nosotros”.

In 2010 she was a repeater in the company of Maria Juncal in the show “Tercera Llamada”.

In the same year she is invited as a dancer in the Miguel Hernandez Festival in Alicante, with the piece “Nanas a la cebolla”.

In 2011 she is soloist and choreographer of the Santander dance company “Contrapposto”, in the premiere of the show “De tripas corazón” and “Más corazón”.

In 2012 she was part of the dance company “Rojas y Rodriguez” with the premiere of a new production called “Filigrana”.

In July 2013 she worked with Merche Esmeralda as a repeater in a flamenco course given for the National Ballet of Spain.

Since 2015 she collaborates in the company of Juan Carlos Avecilla with his show “Melómano” and “Creencias” touring Spain and Europe.

In August 2016 she is a guest artist of the prestigious Gorvio Flamenco Festival (France).

In June 2017 she participated as a guest artist at the Toledo Flamenco Festival sharing the bill with David Palomar.

From 2014 to the present she works regularly in Madrid tablaos such as “La Taberna de Mister Pinckleton”, “La estación de los Porches”, and “Casapatas”. Since the end of 2017 she has been a regular dancer at the excellent tablao “Cardamomo”, sharing tablas with Juan Andrés Maya and Antonio Canales.

Since 2015 she teaches courses and master classes on a regular basis in dance schools in Santander, Valladolid and Burgos, creating shows for festivals.

She currently directs her own company. Her latest show “Mi Tarara” was premiered in October 2018 with a full capacity of 600 people at the Casyc theater in Santander.