Claudia Cruz, one of the great figures of flamenco dance, is known as "the princess of Cadiz" full of strength and flamenco passion. 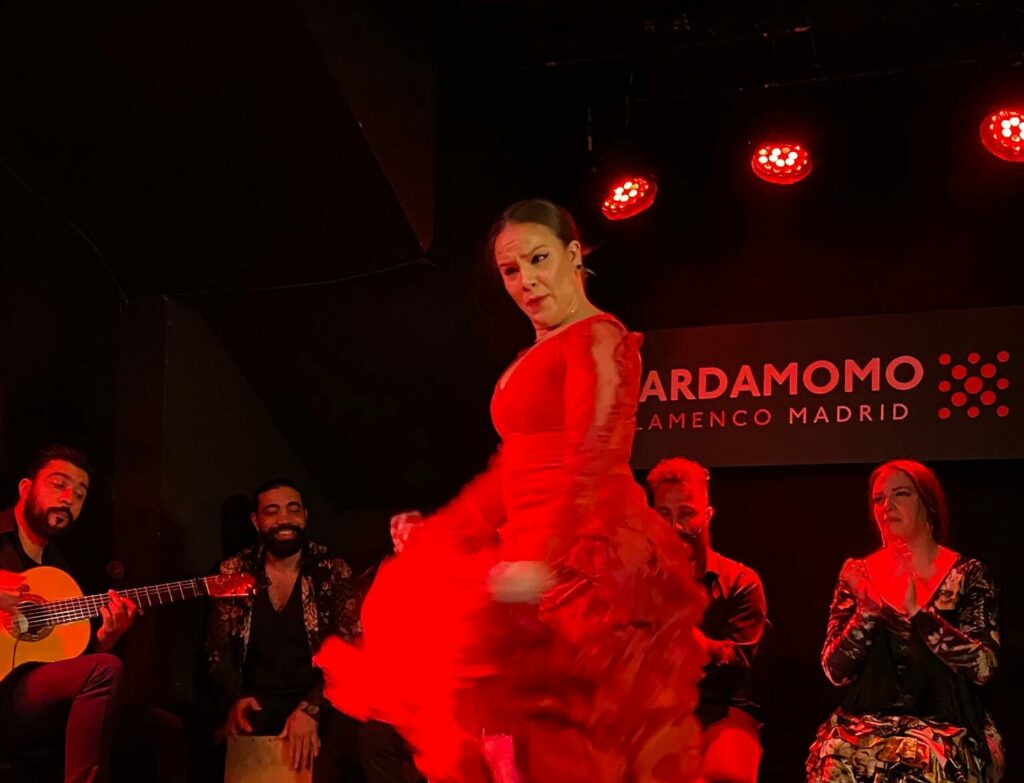 Born in Cadiz in 1986, at the age of 5 she started taking flamenco classes, and later at the age of 10 she began her first ballet and classical Spanish classes at the Cibayi academy, directed by Charo Cruz.
academy Cibayi, directed by Charo Cruz. Currently Claudia Cruz is one of the young values of flamenco dance on the rise. She combines her performances in national and international festivals and theaters with performances in the best tablaos in Spain.

In 2001 she made a special collaboration as a component in the show of the Carnival Proclamation of Cadiz starring Sara Baras. Then in 2003, he also collaborates with the theater company “Los Ulen”, with the Ballet of Monaco performing “Carmen de Bizet”.

In 2005 he began a tour of Japan with the show “Pasión Flamenca” sharing the bill with Enrique el Extremeño, La Tobala, Pedro Sierra and many more. That same year he toured with Turismo Andaluz representing the Andalusian flamenco at European level.

In 2007 he participates in the Flamenco Festival of Granada “Corral del Carbon” obtaining a fabulous success and good reviews. The following year, he participates in the company “Cadiz” directed by the Andalusian Agency for the development of Flamenco, sharing the stage with artists such as: Mariana Cornejo, David Palomar, El Junco, Ana Salazar, Rosario Toledo and many more.

In 2009, he presents his first show “Con Alma” in the Sala Central Lechera in Cadiz, taking as guest artist Enrique el Extremeño at the provincial level.

In 2011, she toured as a guest artist in the show “Niña Pastori en Navidad”, being the first time that Niña Pastori includes in her show a dance figure.

In 2012, she is part of the company of Antonio “El Pipa”, as main dancer, being his dance partner. This same year she presents her show “Claudia Cruz” opening poster of the program of the Bicentennial of the Cortes de Cadiz. She is a guest artist in the show “Ayer y Hoy” starring the master “Rancapino”. She made a special collaboration in the show of the Carnival Proclamation of Cadiz “La Pepa” starring Niña Pastori. She is first dancer in the cycles “La Aristocracia del Flamenco” in the Tablao Cordobés, collaborating with figures such as: Duquende, Carrete de Málaga, Remedios Amaya, La Susi.

In 2013 she is soloist dancer in the show “Jeregüeño” of Antonio el Pipa in the Bienal de Flamenco de Málaga.This same year she participates in the Multicultural Festival “El Arte une las Generaciones” in Wroclaw, Poland. Then she is a soloist dancer in the show “Vivencias” of Antonio el Pipa with Tía Juana del Pipa, Concha Vargas and Carmen Ledesma. She also participated in the show “En la Raíz del Flamenco” premiering at the Lope de Vega theater in Seville with top artists such as: “Dorantes”, Remedio Amaya, Farruquito, Cañeta de Málaga, among others.
Malaga, among others.

In 2014, he participates in the III Flamenco Festival of Japan, sharing the stage with artists such as Pastora Galván, Mercedes Ruiz, La Moneta, Patricia Guerrero, Jairo Barrul, Jesús Carmona among others. This same year she performs the presentation of her show “Ni la hambre la vamo a sentí” sponsored by the city council of Cadiz at the Centro Munincipal de Arte Flamenco La Merced.

In 2015, he premieres his own show “Cádiz – Sevilla, Qué Maravilla” in the XIX edition of the Festival de Jerez.

In 2016, he performs a special collaboration in the show “Entrar al Juego” by Marco Flores premiered in the XX edition of the Festival de Jerez. He also performs collaboration with in the show of Josemi Carmona, member of the famous group Ketama.

It can be seen in her biography that she is a particularly rich dancer with a long career that today gives much to talk about.