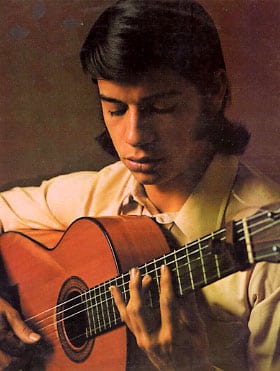 This post is dedicated to the memory of a great flamenco guitarist.

It is possible that you may not have heard of him since there was a time in which he fell into oblivion. Until recently, I did not know of the existence of Niño Miguel; It was by chance, looking for videos of some guitarists on youtube that I read a comment about his “Duende” and Mastery, and I began to inquire about the master and to hear the few recordings that I found, my soul was touched forever by the love aroused in her.

The past 23rd of May, Niño Miguel died in Huelva due to pneumonia. I felt a profound sadness, a vast loss, and with the passing of time, the need to share with you his music and a bit of his history to keep him alive among us.

Niño Miguel learned to play with his father, Miguel ‘ el Tomate’, and as a child accompanied his father in parties and Flamenco gatherings, leaving those who listened to him dazzled. In the 1970s, his way of playing caused a sensation, and it is said that Paco de Lucía once said “right now in the world of guitar, Niño Miguel is the only one who is able to shadow me” openly acknowledging that the way Niño Miguel played influenced him.

He was considered one of the great interpreters of flamenco, possessor of a revolutionary gift that would mark a before and after in the history of the guitar; his art was known across the world.

In 1973, he won the prize of honour in the 2nd national contest of guitar in Jerez de la Frontera, and Spanish Television devoted a special in its ‘Roots’ program when he was only 21 years old. His two albums, ‘Niño Miguel guitar’ (1975) and ‘Different’ (1976), recorded in the studios Phillips and republished in 1999 under the title “Historical Recordings. Flamenco is Universal. Niño Miguel” revolutionized the world of flamenco.

He did not appear frequently on stage, and soon the gods became jealous of him, keeping him away from the limelight, forcing him to give away the beauty of his music to whoever would listen, passing years giving lessons of mastery at squares, streets and bars.

Despite all vicissitude, in 2005 he appeared in the collective work ‘Flamenco Andalusia, Spain and Humanity’ next to Manolo Sanlúcar, Paco de Lucía and Tomatito, and that same year in Seville in the “Flamenco at its Purest” concert, with Agujetas de Jerez and Diego de Morón.

In 2007 premiered Benoît Bodlet y Chechu G.Berlanga’s documentary “Huelva Flamenca” where Niño Miguel plays “El Emigrante” and a “Alegría”, and in the 2009 in the Festival de Cine Iberoamericano de Huelva premiered the documentary dedicated to the figure of Niño Miguel, with files and interviews with Paco de Lucia, Tomatito, Rafael Riqueni, Juan and Pepe Habichuela, Juan Carlos Romero, Enrique Morente, Archangel, Niño Josele, Antonio Mesa and the family of Miguel, directed by Annabelle Ameline, Benoît Bodlet and Chechu G.Berlanga, whose name “The Shadow of the Strings” was chosen by Niño Miguel himself.

In 2011 Niño Miguel returned to the stage in his hometown, in a tribute concert organized by the cantaor Archangel, and in Seville at the Central Theatre, where tickets were sold out and where he managed to excite the public’s emotions with his way of playing, so deep and heartfelt.

Niño Miguel has been admired by all the great guitarists who have heard him, and without leaving Huelva, he was among the best performers and most famous of all times.

One of the greatest interpreters of flamenco has left us, leaving us the gift of his music, full of feeling and sensitivity that only the truly greats possess.

Below, few videos with his music