Gypsy dancer of great trajectory, his art on stage displays sensitivity and spontaneity full of inspiration. His performances have reached national and international level, dancing in theaters and festivals around the world. 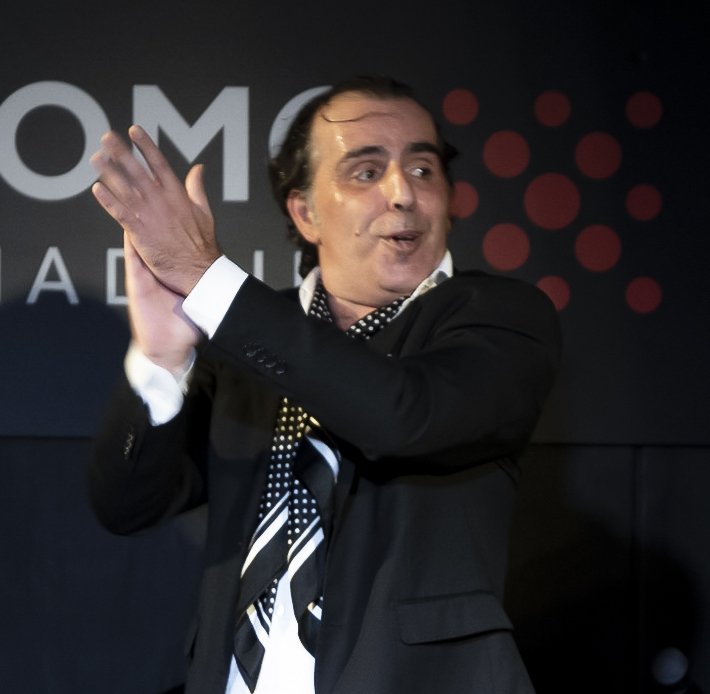 Born in Morón de la Frontera, Seville, inspired by the flamenco that his family gave him. He is the nephew of the master guitarist Diego del Gastor, the dancers Pepe Rios, Andorrano, his aunt Niña Amparo, who was an artist in the Guajiro with “Farruco”, Rafael el Negro and Matilde Coral in the 50’s. All the art that influenced him a lot, as well as his cousins Ramon Barrul and Juana Amaya who made him fall in love even more with the dance. At the age of 11 he began to dance with “Farruco” and Rafael “El Negro“, and from the age of 15 he worked in peñas, tablaos and national and international theaters. He formed his own company and produced his first show “Así Baila Morón“, presented at the Bienal de Sevilla 2004.  Within the Biennial, he participates as bailaor of Antonio Canales, in the Patio Hotel Triana as main bailaor of the group Son de la Frontera, with excellent reviews and in the show directed by Ricardo Pachón, “Perraterías“, with Tomás de Perrate at the Teatro.

A fan of singing, his grandfather Joselero, left Pepe the great love for singing that he felt. His cantaora family comes on the one hand from the Torres de La Puebla and Osuna. On the other hand, his grandmother’s family, the Amaya de los negros de Ronda, also influenced his love of singing. Other inspirations were Perrate, Juan Talega, Manolito de María, Camarón, Chocolate, Tomas Pavón, Pastora, among others.

The teacher Manolo Marín, was a great inspiration, with whom Pepe was able to learn things that have served him throughout his career. But the main teacher is Antonio Montoya ‘Farruco’, to whom he keeps devotion and admiration, and with whom he also taught.
Within the dance he has been inspired by many artists such as Rafael el Negro, bailaoras such as Angelita Vargas and her family, Manuela Carrasco and her family, and three bailaores that he has followed a lot, El Tio Farruco, Ramón Barrul and Juan Ramírez.

Pepe has been part of the group Son de la Frontera (a musical group founded in 1998) for many years. A very nice project, full of nominations and awards, and very important national and international festivals. They recorded two albums, in which they were nominated for the Latin Grammys and obtained the best flamenco group of the year by the BBC. Performances in very important theaters such as the Royal Albert Hall, touring the world from South America, United States, Europe and Spain. Since 2004, Pepe continues with his own company, creating large-scale shows in France, Spain, and the United States. He presents “El baile flamenco de Pepe Torres” at the Flamenco Gitano Festival in New York, thanks to Nina Menendez, produced by a team of fifteen people including musicians, guest artists, sound and lighting technicians, as a self-production without obtaining financial support from institutions or others.

Touring Japan 2004 where he performed in the most important theaters in shows with Manuela Carrasco and Rafael de Carmen, among others.

Son de la Frontera Group, Critics Award, Madrid, Award for Best Live Show of the Year, nominated for the Latin Grammy 2007 and awarded by the BBC in London as best European group.

Participation in the Maestranza Theater, Lope de Vega in Seville and Madrid.  Teatro Albeniz in Madrid, Isabel la Católica in Granada, Teatro Cervantes in Malaga, Gran Teatro in Cordoba, City Center in New York, and El Teresa Carreño in Venezuela among many others.

Pepe assures that he will continue to strive to contribute his grain of sand to the dance, which may be better or worse, but he can say that what he does is called “flamenco”.