A singer of great trajectory, an icon of flamenco art, María performs in all flamenco styles with a voice immersed in feeling and passion. 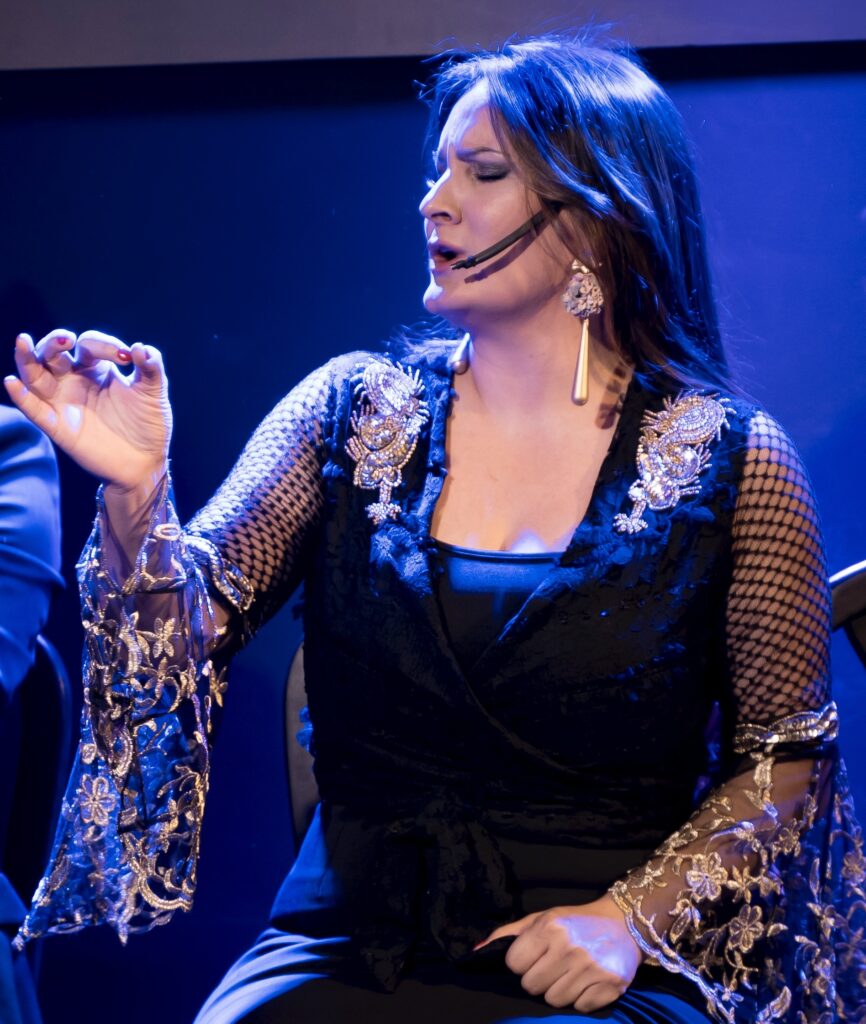 The singer María Ángeles Rodríguez Cuevas, better known as María Mezcle, was born in Sanlúcar de Barrameda (Cádiz) in 1987. Flamenco was part of her life since she was very young. So much so, that at the age of 6 she started at the Puerto Lucero dance academy where she later joined the group “Oleaje” (Sanlúcar de Barrameda).

At the age of 11 she began her career as a singer under the influence of Domingo Rosado from Jerez de la Frontera. Her first public appearance as a cantaora was on Tele Puerto Real, in a flamenco program of Pepe Saldivar in 1999. After performing several songs by soleá de Alcalá, la rosa, tangos and bulerías, she won the first prize for children under 25 years old and the first prize for the Cantes de Sanlúcar in the Las Noches de bajo Guía de Sanlúcar de Barrameda contest at the age of only 12 years old.

He has participated in competitions with Maria Angeles Cuevas, aiming high and performed recitals by the flamenco clubs in Spain, as the Tertulia Flamenca “Pepe Alconchel” of Jerez, Peña Flamenca “Canalejas de Puerto Real”, Tertulia Flamenca de La Isla, among others. With only 13 years old he already interpreted several songs such as: Rosas, Alegrías, Bamberas, Soleares, Tientos, Tangos, Fandangos, Bulerías, among many others.

In 2009 he was part of the Festival “Jueves Flamencos” of Cadiz in the Baluarte de La Candelaria, sharing the bill with Felipe Scapachini and Juana la del Revuelo. She has also sung for Asunción de Martos de Sevilla, Raquel Villegas, Sonia Sarmiento, Miguel Téllez, among others. He has been part of the Flamenco Company of the artist “Antonio El Pipa”, with whom he has toured all the theaters of the Andalusian provinces, through Almeria, Granada, Malaga and Seville.

Participation in the Fandangos Program of Canal Sur.

First Prize for Young Singing by Livianas in Puerto Real.

Third Prize in the Contest of La Silla de Oro de Leganés, Madrid 2008, being chosen to perform as a guest artist at the Leganés Summer Festival in 2009.

In 2007 she presented the Poster of the Contest of Las Noches de Bajo Guía, where she was awarded with First prizes for the cantes de Sanlúcar.

Participation in the Festival del Enclave de Sol sharing Poster with Luis El Zambo, “Moraíto” and Antonio Rey among others.