Percussionist from Madrid, son of Tito Losada, with a great trajectory of flamenco cajón and the rhythmic to the surface, he shows us an exquisite technique. 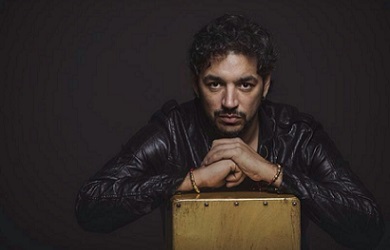 Luis Fernández Salazar, better known as Lucky Losada, was born in Madrid into a family of great artists. At the age of 14 he discovers percussion, specializing in the flamenco cajón.

At the age of 15, he performed as a percussionist in the tablao La Alcazaba and accompanied great dancers on stage. He joined the company of Antonio Canales, where he has collaborated in works such as Torero, Gitano, La Casa de Bernarda Alba, La Cenicienta, and Prometeo, among others. He has also collaborated with Merche Esmeralda in the show “Mujeres” with guest artists Sara Baras and Eva “Yerbabuena.  Accompanying more great artists such as Guadiana, Pepe Luis Carmona, Diego el Cigala, etc..

Together with the singer Enrique Morente and the guitarist “Tomatito” he took a show to the Carnegie Hall in New York (2005). He has produced the albums Sembrando inquietudes and Misa flamenca, by Ramón Jiménez and Tito Losada. He has also participated in the recording of albums of great flamenco figures of the Spanish scene such as “No hay quinto malo” by Niña Pastori, “Parrita con el Alma” by Parrita, “Aguadulce” by Tomatito, “Undebel y Picasso en mis ojos” by Diego el Cigala and “Cuando el río suena” by Guadiana.  He has collaborated in the last CD of “Azúcar Moreno” which was recorded in December in Miami.

For years he has been working with the artist “Tomatito” as a percussionist, with whom he has collaborated in acclaimed shows such as “Sonata Suite”. This work, premiered at the Teatro de la Maestranza in 2004, returned to the stage in 2008 in Madrid with the collaboration of the National Orchestra of Spain.

He was in charge of the direction of the play “Lisistrata” with Niña Carmona and Juan Parrilla. He is in charge of the organization of the famous Suma Flamenca festival in Madrid, together with the blond family “cuerpo mente y alma”, Karime Amaya, José Maya and Juan de Juan. He has also collaborated in the show “Impetus”, of the renowned dancer Jesús Carmona and in others like “Zambomba Flamenca” in the theater of La Latina.