Master of compás and zapateado, it is considered the best footwork to date. A pure gypsy dance that has been of great influence to the following generations. Being unmissable live, impeccable in technique, and with an exquisite sound. 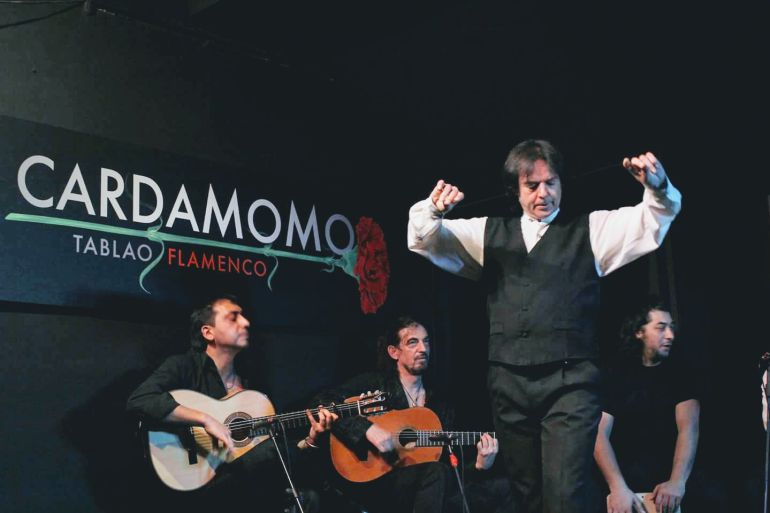 Born in Merida, at the age of ten, he began his career in the world of flamenco. He learns in the street, watching the greats like Manuela Carrasco, Angelita Vargas, el Mimbre, Manuela Vargas, La Chana among others. Always consistent with the purity that comes with flamenco, his unparalleled technique envelops us in an extraordinary flamenco experience. After a long career, Juan, launches himself as a singer and releases his first album “Más flamenco que el tacón” in 2004. He is currently touring as a bailaor and cantaor throughout Spain.

1982 – Participation in the Biennial of Flamenco Art of Seville: “El Giraldillo”.

1985- Participation in the tour of Paco de Lucia in European countries.

1989- Dances in the program “Viva el espectáculo” of Concha Velasco, dedicated to the April Fair in Seville.

1994- Performance with Manolete, la Macanita, etc, at the Monumental of Madrid.

1998- Performance and tour in Spain with Sara Baras and Antonio Canales.

2004- Releases the album “MAS FLAMENCO QUE EL TACON”, with the participation of Remedios Amaya, Guadiana and Parrita on vocals.

Dances with Antonio Canales at the Teatro de la villa in Madrid.

Participation in the contest: “El flamenco viene del sur”, in the central theater of Seville.

Participation with Paco de Lucia, in the closing night of the Madrid Flamenco Summit.