A flamenco dancer from the first hair on her head to the tips of her toes. Cristina has spent a lifetime devoted to dancing for voice and guitar, which she has complemented with her work as an actress. This year she has been recognized with the first prize in the contest of Ubrique. Just back from a tour of China, we can enjoy her dance full of feeling in Cardamomo. 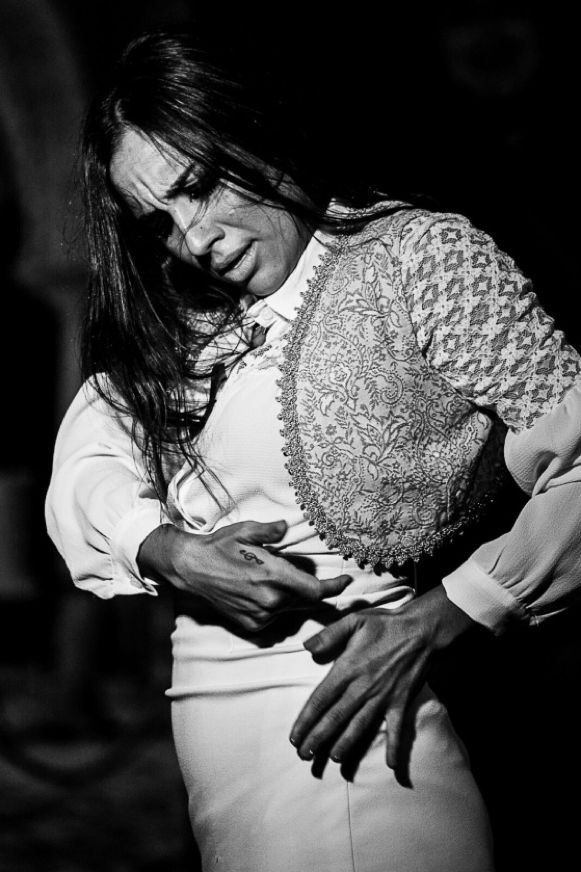 Cristina Prado Carrasco was born in Cordoba cradled by the dance and flamenco guitar. From a very young age, the duende of her dance was evident. She began her training at the Conservatorio Profesional de Danza Luis Del Río (1998-2008).

She currently resides in Granada, encouraged by the enormous flamenco atmosphere that is breathed in this city.

In 2002 she starred in the musical Annie at the Gran Teatro de Córdoba. This same year, he was awarded the special mention of the Jury in the contest Veo Veo for his artistic quality.

In 2007 he participated in the commemorative acts of the Day of Andalusia, celebrated in the Municipal Theater of Ecija (Seville).

In 2008 he danced in the shows “Lorqueando”, “Jondura” and “Capricho” in La noche blanca del Flamenco de Córdoba. In the same year she performed as part of the dance group “Encanto cordobés”.

In 2009 she performed as a dancer and actress in the show “Ópera Flamenca. Medea” in La noche blanca del Flamenco de Córdoba.

In 2010 she worked as a dancer and actress in the show “Capricho” in La noche blanca del Flamenco de Córdoba.

In 2013 she lives in Tarragona and works in different and recognized flamenco tablaos.

In 2014 she continues in the Company of Javier Perez Serrano as first dancer, touring different cities in Russia.

In 2016 she joins the Origine Company as principal dancer.

In 2017 she goes on tour with the Origine Company in Singapore, Kuala Lumpur and the Philippine Islands.

In 2018 she toured China twice with the play CARMEN, playing one of the leading roles in the show.

In 2019 she received the First Prize of the National Contest of Flamenco Art “Ciudad de Ubrique”.

Cristina Prado Carrasco is one of those Flamenco dancers who give body and soul in every dance step.

The extensive training and the natural talent of her art make her dance something unique.