Carmen is one of the most promising young flamenco dancers of today. Her marked elegance together with her technique and charm are not to be missed on stage. 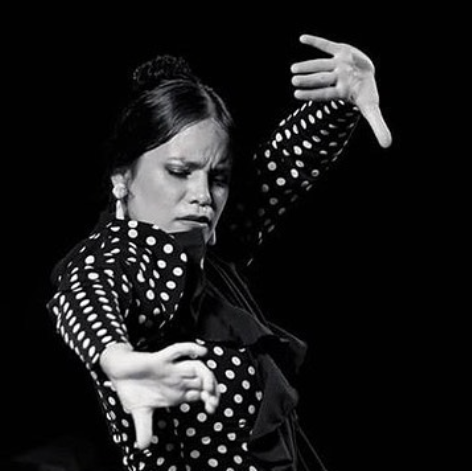 Born in Aguascalientes, Mexico, Carmen began her dance studies at the Flamenco Vive Academy in Aguascalientes. She has taken classes from Manolo Marín, Cristóbal Reyes, María Juncal, El Junco, Isabel Bayón and Juana Amaya, among others.  Since her arrival in Seville, she became one of the most outstanding students of the Cristina Heeren Foundation.  Since 2012 she has continued her studies in Madrid and Seville, and has also taken short courses with Choro Molina, Mercedes de Córdoba and Lucía “La Piñona”.

Winner of the scholarship for Studies Abroad of the Cultural Institute of Aguascalientes through the State Fund for Culture and the Arts, FECA 2012-2013. She has participated in different shows with maestro Cristóbal Reyes, being a repeater in some of them and also with María Juncal, Javier Latorre and Antonio Molina “Choro” in the show “Flamencos y mestizos” in 2019.

Since March 2018, she has been performing on the stage of “Casa de la Memoria” and has been part of María Juncal’s company Bailamos Flamenco as lead dancer, in the Mexico City theater. She has participated in several tablaos, halls, theaters and distinguished festivals in different cities such as Mexico, Madrid and Bilbao. In the latter she participated in the “Flamencos y Mestizos” series, sharing the stage with the dancer Antonio Molina “El Choro”, directed by Paco Ortega.

She was a soloist in the XX Festival de Jerez with the show “Eclosión” of the Cristina Heeren Foundation and as a dancer and understudy in “Flamenconautas”, directed by Javier Latorre.