She was born in El Puerto de Santa María (Cádiz), and she climbed onto a stage for the first time at the age of four, since then she has not stopped dancing. Recognized worldwide as a dancer of pedigree and elegance. She belongs to the family of Los Maya (Negros de Ronda). 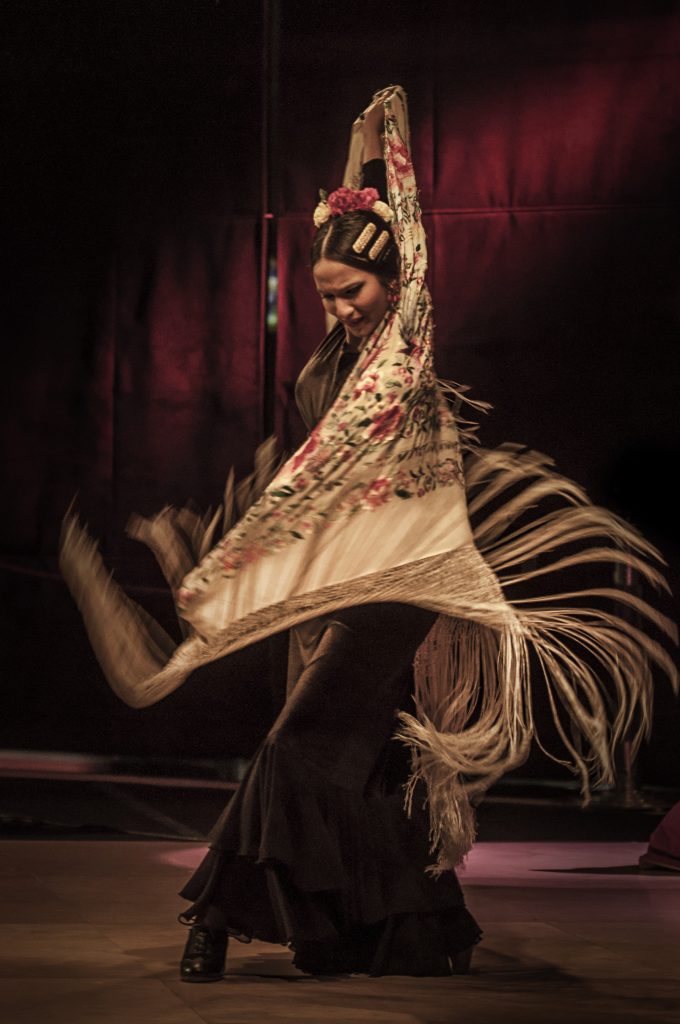 Aitana de los Reyes presents herself as a pure gypsy dancer. She is a descendant of the Viejo Agujeras, from the Amaya family (Negros de Ronda). She grew up in El Puerto de Santa Maria (Cadiz) surrounded by flamenco. Her cantaora mother and guitarist father taught her from the cradle the importance of compas. She had not yet learned to walk when she was already entertaining weddings and other types of gypsy celebrations that she attended with her family.

The enthusiasm and talent that Aitana felt intrinsically for flamenco was so strong that it was at the age of four when she first took the stage. She was one of the protagonists of the cast of dancers in the program “Mi primer Ole” of Canal Sur.

The beginnings of this dancer go back to the different gypsy celebrations she attended with her family, going on to collaborate in different Associations or Peñas de Cádiz. In 2008, she was already performing regularly in a tablao called “La Posada del Puerto”. The following year, he performed as a Young Promise of Dance in Cadiz for the “IX JORNADAS DEL AYER, HOY HOY Y EL MAÑANA” (IX JORNADAS DEL AYER, HOY Y EL MAÑANA).

In 2010, she participates in the show “Jóvenes Talentos” in the 7th International Festival of the “Teatro Alhambra” in Geneva (Switzerland). From the age of 13 to 21 years, with this same show, he takes his art to many countries such as Japan, France, Portugal, Germany, Colombia and Palestine. He is part of the cast of the show “Rancapino Chico” referring to his first album “Por mi amor al arte”.

Participation in the Festival de Jerez, in the Cycle of Peña in “La Buena Gente” and “Torres Macarena” in Seville. In the Provincial Circuit of Peñas organized by the Provincial Federation of Flamenco Peñas in “La Perla de Cadiz”.

Special performance at the FESTIVAL AL KAMANDJATI 2018 in JERUSALEM, PALESTINE. She has combined these world tours with performances in different flamenco corners of recognized prestige in the capital of Spain, such as Tablao Flamenco Cardamomo.

In 2017 she performs in different international flamenco venues such as the “Sala Andaluza” in Tokyo (Japan); or the “Teatro Da Trindade” in Lisbon (Portugal).

In 2016 she dances in different flamenco peñas in her homeland such as “El Pescaero” or “El Palacio del Virrey Laserna” both in Jerez de la Frontera. He travels to the Teatro Mayor in Bogota (Colombia) with the show “Julio Mario Santo Domingo”. This same year, he participates in the “Ciclo flamenco y mestizos” directed by Paco Ortega for the SGAE in Madrid.

He is part of the company Antonio Rey in Wurzburg (Germany), and participates in the show organized by the European Twinning Committee Utrillas-Decazeville, in France. At the same time, he combines all these international performances with numerous shows in his homeland, Andalusia.